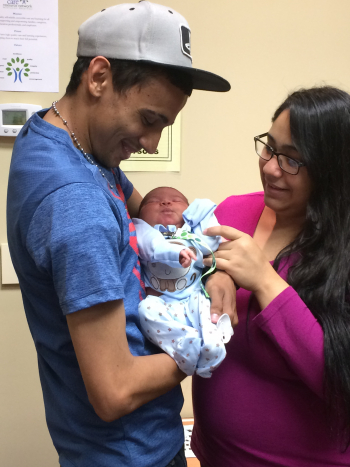 In the middle of the Fall 2016-17 Child Development Associate (CDA) course, a CDA Candidate, Kathia, shared with her classmates and teacher, Gayle Nixon, that she was expecting and due towards the end of the course. Kathia worked hard throughout the course, despite the various struggles that can accompany pregnancy, working full-time, and earning a CDA.

Her teacher became worried near the beginning of September when she realized Kathia was not present for their final CDA class, a requirement of the course. Many speculated that she was possibly having her baby during that time. Moments after class began, Kathia walked into class with a special visitor: her brand new baby boy! Not only had Kathia just had her newborn five days earlier, she continued her commitment to earn her CDA. By the end of the night, just five days after giving birth, Kathia earned her Child Development Associate.

We are proud to have these type of dedicated, hard-working students as our CDA candidates. Congratulations to the new mother, as well as the class of Fall 2016-17 CDA Graduates!